(From "The checklist manifesto. How to get things right" Atul Gawande Metropolitan Press 2010)

Good checklist:
Precise
Efficient
Easy to use even in difficult situations
(Do not spell out everything, check lists can not fly planes).
Provides reminders only in most critical and important steps
Practical
Words should be simple and exact
Should use usual language used in profession
Should fit in 1 page, free of clutter and unnecessary colors
Use of upper case and lower case letters (to make it easy to read)
San serif is better (Helvetica)!

Bad checklist:
Vague and imprecise
Too long
Hard to use
Impractical
Treats people using them as dumb and try to spell out every single step
Turns people's brain off, rather than turning them on

Checklist contents should not exceed 5-7 points (that are "killer points")
Should not exceed 60-90 sec for a "pause point". After this, the check list becomes a distraction. People start to "shotcut" steps.
Posted by Bala at 6:30 AM No comments: 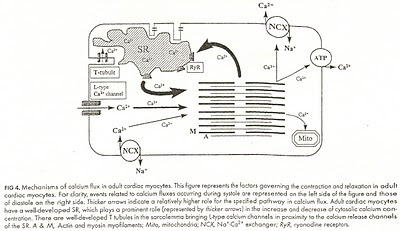 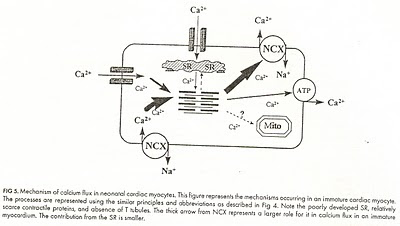 
4) Actin and Myosin have different isoforms for heavy and light chains - which increase in sensitivity to calcium with increasing maturity, thus influencing inotropy and lusitropy of the cardiac myocyte.
Posted by Bala at 9:35 PM No comments:

Patient #1:
Both panels are from the same patient with and without pacing.
Compare the LA traces between the two panels. 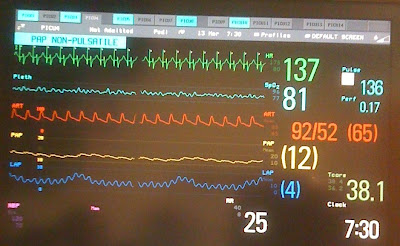 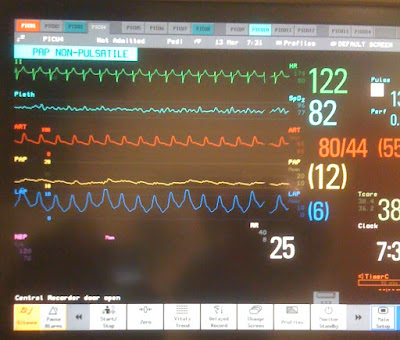 Patient #2:
What is the dominant wave in LA trace in this patient?
Correlate with EKG trace noted above.
(5 yr old, s/p Fontan...1 week postop after surgery to re-route hepatic vein to Fontan circuit secondary to pulmonary AVM)
Comment on the CVP trace. Why aren't there any waves? 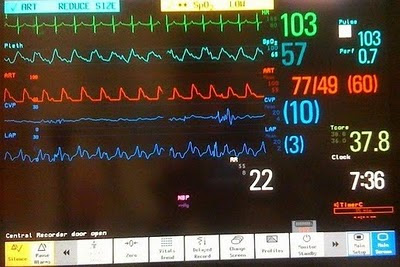 (From Park's Pediatric cardiology for practitioners)

Decision making re: surgery and its timing in acute infective endocarditis:

2) Circulation 2010;121:1005-13. Lalani T, et al. Analysis of impact of early Surgery on in-hospital mortality of native valve endocarditis.
Data from an international registry. Non-randomized, retrospective study. So, of limited help. But, still useful information from a large cohort. Conclusion is that early surgery for native valve endocarditis has benefit of lower mortality compared to medical therapy alone. (Defn. of early surgery is replacement or repair of valve during initial hospitalization for IE).
...Read als0, the editorial on this article at Circulation 2010;121:960-2. 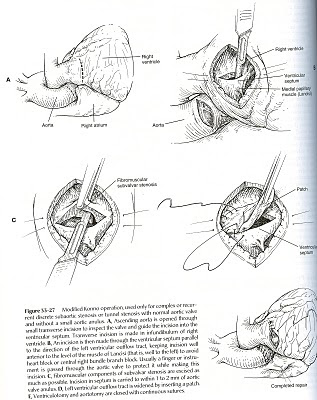 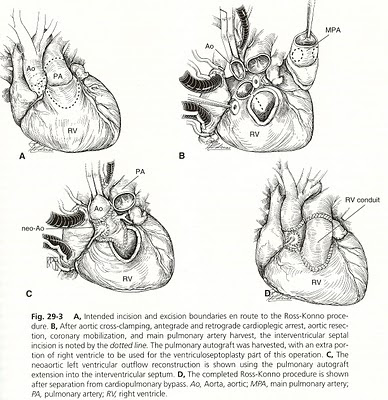 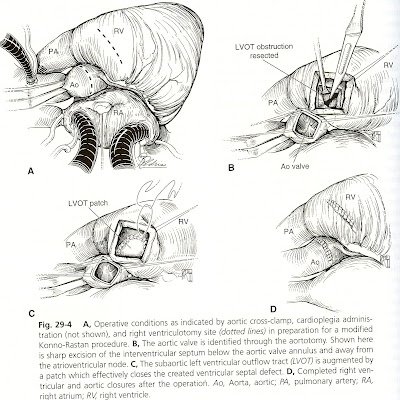 
VSD sutures go on the rightside of the crest of septum to avoid LBB and AV node - as shown below: 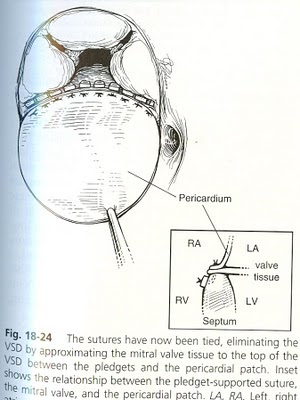 (All Tables were taken from Myung Park's "Pediatric Cardiology for Practitioners") 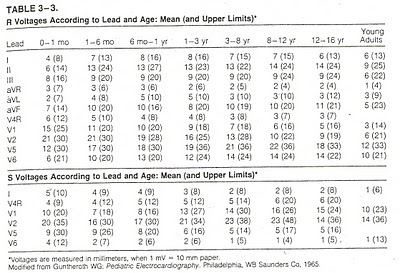 And, at the interatrial septal level. 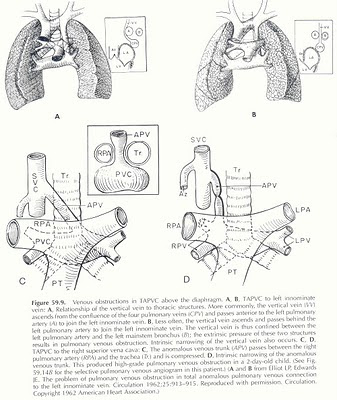 Image from Moss and Adams Fifth Edition 1995.
Posted by Bala at 3:00 PM No comments:

Five rules for the class of 2005:
1) Ask an unscripted question
2) Don't whine
3) Count something
4) Write something
5) Change,
...To have a good life in medicine
http://www.leighbureau.com/speakers/AGawande/essays/Harvard.pdf
Physician Autonomy: (Excerpt from "The checklist manifesto - How to get things right" Atul Gawande. Metropolitan books 2009)
p 65: ...the medical way of dealing with extreme complexity - with inevitable nuances of an individual patient case - is to leave them to the expert's individual judgement. You give the specialist autonomy. In this instance, Rouillard was the specialist. Had the building site been a hospital ward, his personal judgement would hold sway.
This approach has a flaw, however, O'Sullivan pointed out. Like a patient, a building involves multiple specialists - the sixteen trades. In the absence of a true Master Builder - a supreme all-knowing expert with command of all existing knowledge - autonomy is a disaster. It produces only a cacophony of incompatible decisions and overlooked errors. You get a building that doesn't stand up straight. This sounded to me like medicine at its worst....
p67: ...Man is fallible, but may be men are less so...
Posted by Bala at 5:49 AM No comments:

"Crochetage" (Notch) on R wave in inferior limb leads: A new independent electrocardiographic sign of atrial septal defect. Heller J, et al. JACC 1996;27:877-882
Extract from above article:
"Crochetage" is a notch near the apex of R wave in inferior limb leads.
First reported in 1959 in 11 pts. with ASD. Mechanism of production of this crochetage is not known.
1) Crochetage is independent of Incomplete RBBB (iRBBB) seen in V1 for the following reasons:
(i) Crochetage may be present without iRBBB pattern
(ii) Crochetage disappears in immediate postoperative period while iRBBB - which is due to chronic RV volume overload persists longer
(iii) Crochetage always involves the first 80 ms of R wave, while iRBBB involves the last part of R wave.
Examples from 2 patients: 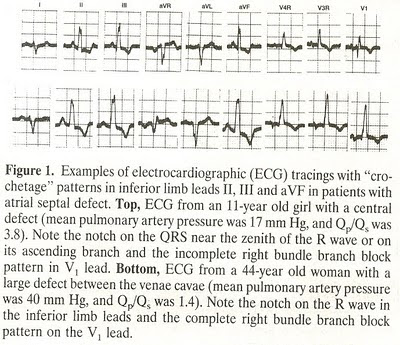 Disappearance of "crochetage" 3 days after surgery for ASD: 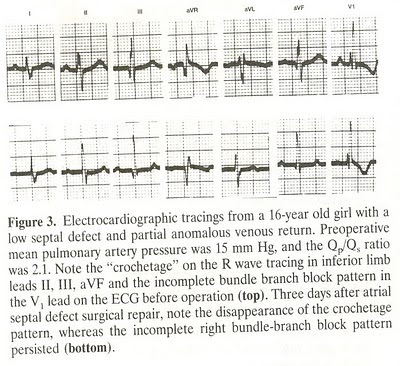 Crochetage is not unique to ASD...and is noted in normal children too!
But, it is highly specific (92-100%) for ASD and for other conditions:
For ASDs, crochetage is not any more sensitive than iRBBB. 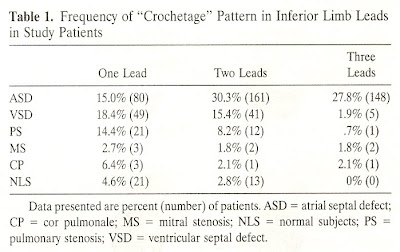 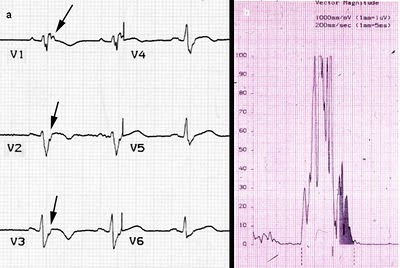 Anerobic Threshold: Time at which the patient starts to exhale increasing amounts of carbon dioxide (VEco2) to compensate for a build up of lactic acid and resulting metabolic acidosis.

At AT, lactate starts to accumulate. Since it is a weak base, it readily dissociates releasing H+ ions. These H+ ions are bufferred by bicarbonate system. This generates extra CO2. This results in increased rate of release of CO2 (VEco2) without a concomittant increase in oxygen consumption (Vo2).


At this point, there is hyperventilation relative to Vo2, but not relative to Vco2. This is Anerobic Threshold. 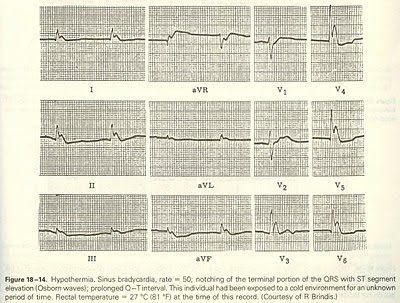 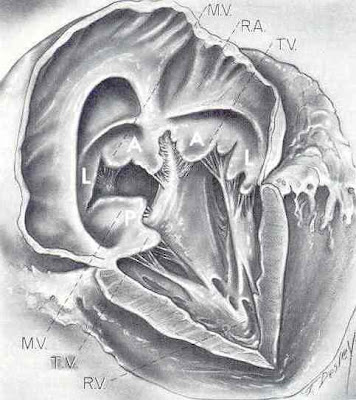 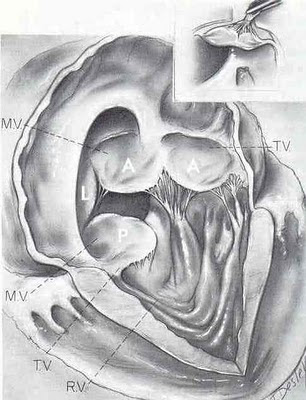 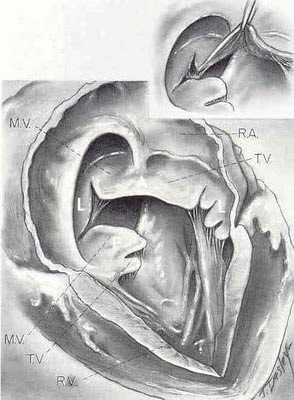