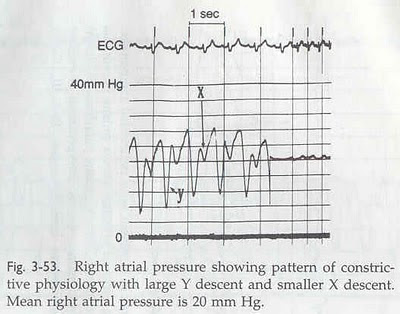 Constrictive Pericarditis:
(From Boston Cath Manual)
1) Increase or equalization of pressures in RA, LA and EDPs (all within 5 mmHg from each other)...Isn't this normal?!
2) Kussmaul Sign: Loss of inspiratory decline in RA pressure (shown in trace above - lower panel)
3) Equalization of a and v waves, preserved x decent and prominent y decent. Thus creating "M" pattern. (shown in trace above)
4) Square root sign in ventricular pressure trace (both RV and LV). Shown in trace above. Also called "Dip and Plateau" sign.
Masked by tachycardia due to short diastole. So, inducing a PVC shows a long diastole - to visualize this pattern.
5) Record ventricular pressure during an induced ectopy for reason stated above.
6) Important: Most senstive and specific signs.
Ventricular discordance or Ventricular interdependence: Normally, RVSP and LVSP are supposed to raise and fall together with different phases of breathing. In Constrictive pericarditis, RVSP raises during inspiration while LVSP falls.
Also, Early transmitral gradient (LA - LVEDP or PAWp - LVEDP) decreases during inspiration. Normally, there is no such variation with respiration.
Posted by Bala at 8:05 AM