How to meaure it? 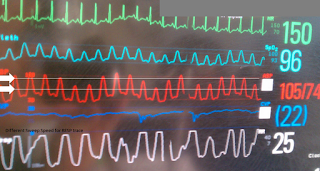 (Click on image to enlarge)
You need a manual sphygmomanometer.
We are looking for decrease in systolic BP between inspiration and expiration.
First, determine the BP of the patient. Then, raise the pressure in the cuff above the measured systolic pressure and bring it down slowly (2-5 mmHg steps) - holding the cuff pressure at each level for at least 2 breaths. When Koratkow sounds are first heard (take this as expiratory systolic BP), these will be intermittent because these sounds are heard only in expiration and not heard during inspiration. Thus, in the initial part of the descent, you only hear Koratkow sounds intermittently. (First arrow in the figure above)

Continue to decrease the cuff BP (slowly) - holding at each step for at least 2 breaths. There will be point when Koratkow sounds are heard continuously. In other words, you would suddenly hear more Koratkow sounds than before. This is the inspiratory - systolic BP (Second, lower arrow in the figure above).

Other signs of pericardial tamponade (or restriction) is Kussmaul sign. This is inspiratory increase in JVP.  This is what is opposite of normal. Apparently, some how, the term paradoxus has transferred to pulsus paradoxus?! 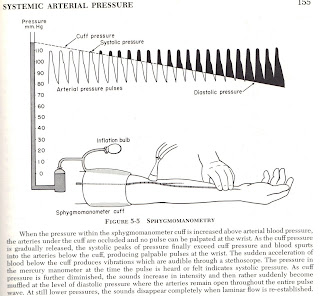