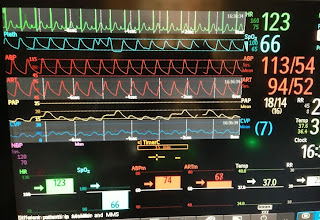 In this example, CVP trace has taller v wave compared to a wave. v wave corresponds to the peak of arterial trace - i.e. ventricular systole. Note: Arterial ejection peak is somewhat delayed from the electrical systole (QRS complex) due to the delay between electrical systole and mechanical systole and a slight delay in arrival of the peak of arterial trace to the femoral artery and right radial artery. (In this panel, trace labelled ABP is right radial artery line and the trace labelled ART is left femoral line).
Posted by Bala at 9:00 AM