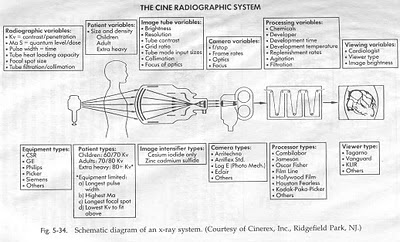 X-ray tube: converts electrical energy into X-ray beam. Electron beams from a heated cathode are accelerated towards the rotating disc of anode. The electrons become X-rays upon contact with anode. But, only 0.2-0.6% of electrical energy provided is eventually converted into X-ray. This process generates extreme heat.

2) Kilovoltage level (kV): The wavelength of the X-ray beam. Higher the kV, shorter is the wavelength. Less tissue penetration. So, for obese patients, high kV is needed to get adequate penetration. But, high kV leads to poor resolution of the image. Higher kV also increases scatter and therefore, higher exposure to lab personnel.

High kV allows to keep mA low, but the trade-off is low-contrast in the image. A balance has to be struck. kV has more effect on image contrast than mA.
3) Exposure Time (s): Pulse width
Posted by Bala at 8:34 AM